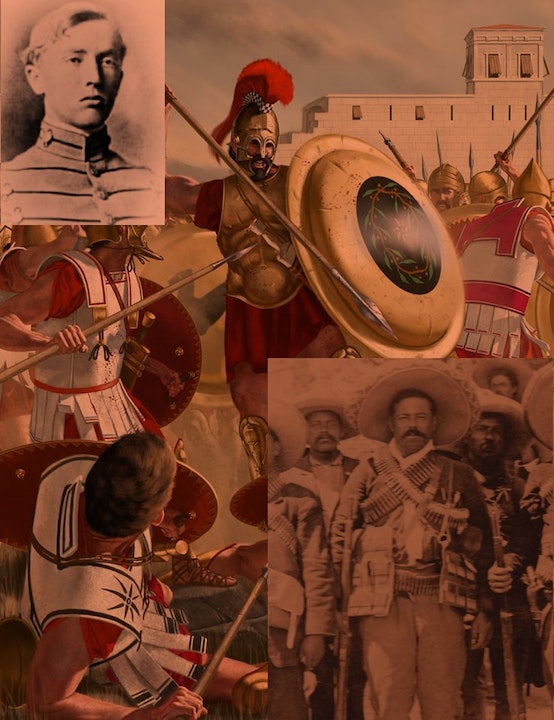 <p>At the sound of galloping horses, the bandit killer drew his ivory handled colt. It was good for 6 shots and - while there were only three bandits - they were riding hard and fast and straight at him. Conditions that don’t necessarily...

At the sound of galloping horses, the bandit killer drew his ivory handled colt. It was good for 6 shots and - while there were only three bandits - they were riding hard and fast and straight at him. Conditions that don’t necessarily enhance one’s ability to shoot calmly and accurately.

Strangely enough, even as the bullets began to crack past the bandit killer’s face, he remained calm. Remarkably calm for such a young officer engaged in his first fight.

But he really wasn’t all that young. And this wasn’t his first fight, not really.

On this latest episode of Bloody Beaver Podcast, I share the story of a legendary soldier, one who cut his teeth at the tail end of the wild west. But if you were to hear him tell it, he got his start much MUCH earlier than that.

For further reading on this episode’s topic:

Through the travail of the ages,
Midst the pomp and toil of war,
I have fought and strove and perished
Countless times upon this star.

In the form of many people
In all panoplies of time
Have I seen the luring vision
Of the Victory Maid, sublime.

I have battled for fresh mammoth,
I have warred for pastures new,
I have listened to the whispers
When the race trek instinct grew.

I have known the call to battle
In each changeless changing shape
From the high souled voice of conscience
To the beastly lust for rape.

I have sinned and I have suffered,
Played the hero and the knave;
Fought for belly, shame, or country,
And for each have found a grave.

I cannot name my battles
For the visions are not clear,
Yet, I see the twisted faces
And I feel the rending spear.

Perhaps I stabbed our Savior
In His sacred helpless side.
Yet, I’ve called His name in blessing
When in after times I died.

In the dimness of the shadows
Where we hairy heathens warred,
I can taste in thought the lifeblood;
We used teeth before the sword.

While in later clearer vision
I can sense the coppery sweat,
Feel the pikes grow wet and slippery
When our Phalanx, Cyrus met.

Hear the rattle of the harness
Where the Persian darts bounced clear,
See their chariots wheel in panic
From the Hoplite’s leveled spear.

See the goal grow monthly longer,
Reaching for the walls of Tyre.
Hear the crash of tons of granite,
Smell the quenchless eastern fire.

Still more clearly as a Roman,
Can I see the Legion close,
As our third rank moved in forward
And the short sword found our foes.

Once again I feel the anguish
Of that blistering treeless plain
When the Parthian showered death bolts,
And our discipline was in vain.

I remember all the suffering
Of those arrows in my neck.
Yet, I stabbed a grinning savage
As I died upon my back.

Once again I smell the heat sparks
When my Flemish plate gave way
And the lance ripped through my entrails
As on Crecy’s field I lay.

In the windless, blinding stillness
Of the glittering tropic sea
I can see the bubbles rising
Where we set the captives free.

Midst the spume of half a tempest
I have heard the bulwarks go
When the crashing, point blank round shot
Sent destruction to our foe.

I have fought with gun and cutlass
On the red and slippery deck
With all Hell aflame within me
And a rope around my neck.

And still later as a General
Have I galloped with Murat
When we laughed at death and numbers
Trusting in the Emperor’s Star.

Till at last our star faded,
And we shouted to our doom
Where the sunken road of Ohein
Closed us in its quivering gloom.

So but now with Tanks a’clatter
Have I waddled on the foe
Belching death at twenty paces,
By the star shell’s ghastly glow.

So as through a glass, and darkly
The age long strife I see
Where I fought in many guises,
Many names, but always me.

And I see not in my blindness
What the objects were I wrought,
But as God rules o’er our bickerings
It was through His will I fought.

So forever in the future,
Shall I battle as of yore,
Dying to be born a fighter,
But to die again, once more.